#UnisResistBorderControls had their first meeting on Saturday 5th March at SOAS, University of London. We were joined by  Save Kelechi campaign, The Campaign to Stop the Deportation of Luqman Onikosi, Movement for Justice by Any Means Necessary, Fighting Against Casualisation in Education, and the SOAS Justice For Cleaners campaign.

A program from the #UnisResistBorderControls discussion and talks can be found below. 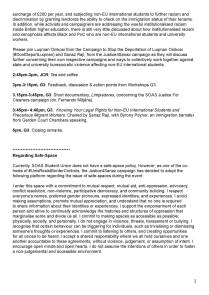 Some photos from the event. 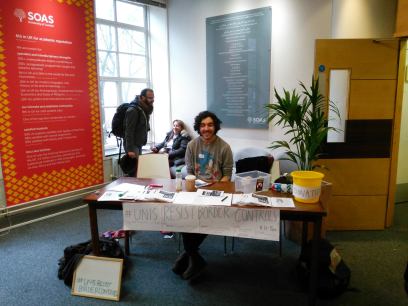 Consuelo Moreno speaking with the help of an interpreter. 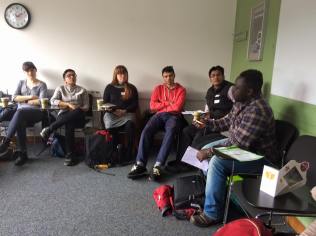 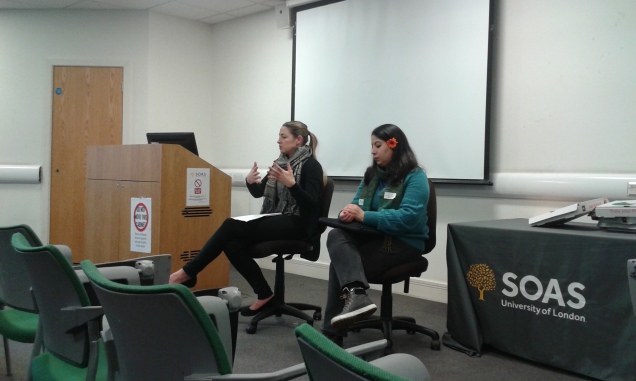 Having various campaigners and groups coming together to specifically discuss the various issues surrounding non-EU international students, scholars and university workers was a crucial step into hopefully putting together some concrete action plans in the next couple of months. Bryony Poynor, an barrister at Garden Court Chambers in London, specializing in immigration law, who was a guest speaker at #UnisResistBorderControls meeting indicated that she would be interested in helping to put together a “know your legal rights” pamphlet for non-EU international students and university staff. We will be exploring this initiative and brainstorming other ideas in the next few weeks.

Post #UnisResistBorderControls meeting, we decided to put together a statement concerning the treatment of non-EU international students, scholars and university workers. This statement was published on Media Diversified and initially endorsed by 41 academics and activists, including members of Fighting Against Casualisation in Education, No Borders Leeds, and the Green Party of England & Wales. Since being published last Wednesday, many other academics and activists have since come to endorse the statement. We would like to acknowledge everyone who has signed the statement. Please find the statement and the full list of signatures below.

On Saturday 5th March, the Justice4Sanaz campaign along with SOAS Students’ Union hosted, #UnisResistBorderControls, a day of discussions and workshops around the treatment of non-EU international students and precarious migrants within higher education. #UnisResistBorderControls came about due to the lack of discussion and action within mainstream student activism around the particular situations af

fecting non-EU international students and migrant workers, especially those who are Black, Muslim, and people of colour (PoC). The discussions and workshops looked to address the ways in which the intersection of UK Visa and Immigration (UKVI)  and now PREVENT surveillance is used to criminalise, restrict and oppress our bodies.

The racist and xenophobic border controls of Fortress Europe and Fortress Britain –  which are responsible for the drowning deaths of countless numbers of refugees and asylum seekers fleeing violence, often because of or exacerbated by British, EU, and US foreign policy; as well as the imprisonment of migrants in detention centres like Yarl’s Wood or Harmondsworth, where they are  inhumanly treated, denied medical care, and sexual violated – are also being used inside British universities, to the detriment  of non-EU international students, scholars and university workers.

The criminalisation of non-EU international students is also evident in other more insidious ways.  Academics are required to inform the Home Office if they have any suspicions that a non-EU international student is breaching the conditions of their leave to remain in the UK, or if the student is engaging in ‘suspicious behaviour.’ Putting academics on the front line as border and now thought police for UKVI and also PREVENT has detrimental effects on creating a space for learning and critical engagement, as recently echoed by an academic based at Birkbeck College who recently wrote anonymously, stating, “None of the government’s policies have been tested in this way.” A non-EU international student from the US summed it up best,

“The Home Office’s continued threats towards international students have created an Orwellian monitoring system that shreds the peace of mind and the sense of stability necessary for critical reflection and groundbreaking research. Such meddling undermines the mental wellbeing of young persons and mocks the vocation of people who came to this country to use its libraries and laboratories, and to learn.”

The Orwellian situation vis-a-vis non-EU international students is clearly seen in the case of Dr Paul Hamilton, a noted scholar of Shakespeare and a recent PhD graduate from the University of Birmingham, who spent ten days in a detention centre, and who condemned his treatment by the Home Office, as “completely brazen, cynical and unapologetic.”
We are seeing non-EU international students increasingly targeted by the Conservative government’s racist and xenophobic migration policy with British universities happily implementing these policies with very little opposition. Last week, Sussex University was occupied by student activists to oppose to how the university has colluded with UKVI to remove Luqman Onikosi, a disabled non-EU international student from Nigeria with a chronic liver condition, who would face death if removed from the UK; as Nigeria does not have the facilitates to care for his condition. Kelechi Chioba, another disabled non-EU international student from Nigeria, is currently battling with the Home Office to prevent her removal, where her family in Nigeria considers her “a curse and a source of shame” and people have previously tried to kill her. Even the newly elected National Union of Students (NUS) Scotland Asylum Seeker & Refugee officer, Lord Elias Mensah Apetsi, also a postgraduate student at Strathclyde University, is now facing deportation, having been detained by UKVI early in the morning on Saturday 19th March, and now currently in a detention centre.  Thanks to enormous public pressure, Apetsi was spared being removed from the UK last night on a scheduled charter flight to Ghana. However, many other refugees, asylum seekers, and also non-EU international students are less lucky, finding themselves battling both the Home Office and UKVI with very little support or help from institutions that could very well make the difference. We fail to understand why Sussex University Union has failed to emphatically support Luqman Onikosi and the #DontDeportLuqman campaign, or why both the Leeds University Union and the NUS Black Students’ Campaign have failed to support the Justice4Sanaz campaign? As Ananya Rao-Middleton recently wrote in relation to the lack of institutional support for non-EU international students,

“If we fail to provide…support to those who need it most […] we are allowing SUs to become neoliberal service providers, rather than platforms for student voices and sites of solidarity.”

Universities also institutionalize xenophobic immigration rules in order to unfairly disenfranchise and marginalize non-EU international students, scholars and university workers who fight against victimization, unfair dismissals, and institutional racism, thereby preventing them from seeking recourse for the injustices that they have faced. Often times, this affects primarily Black and PoC non-EU international students. In 2009 SOAS management called in UKVI for a surprise raid on cleaners who were a part of the SOAS Justice For Cleaners campaign, with 9 activists consequently deported. As the Justice4Sanaz campaign has shown through e-mails acquired by a Freedom of Information request, her former PhD supervisor was happy that Sanaz was facing visa problems, directly as a result of the University of Leeds which took close to a year to make a decision concerning her internal academic appeal, stating that she hoped Sanaz “fails” at remaining lawfully in the UK to see her campaign through. Just recently, a crowdfunding link has been circulating around social media concerning the plight of Dr Debojyoti Das, an academic researcher who was formerly based at Birkbeck College. Dr Das was unfairly made redundant when his PI moved the project he was employed at to Harvard University. Although Dr Das challenged the decision by Birkbeck College, as a non-EU international scholar, there was no redress for his unfair dismissal. Dr Das not only lost “his job, students, pension contribution and the academic space in the university” but he is now fighting to remain lawfully in the UK as he is married to a British citizen.

If you would like to get involved in the #UnisResistBordersControls campaign, please e-mail: justice4sanaz(at)gmail(dot)com and we will put you on a FB private group set up since the 5th March meeting.

For 3 years, Sanaz Raji, a non-EU international student from the United States, has waged a fearless and brave fight against institutional aggression, bullying, and racism from the School of Media and Communication (formerly the Institution of Communications Studies) University of Leeds. The School of Media and Communication took away Sanaz's scholarship in August 2011, only 2 weeks before the start of her third year into her PhD studies. The School of Media and Communication breached their own procedures and rules concerning evaluating student progress. By taking away Sanaz's scholarship, the School of Media and Communication prevented her from continuing her studies in addition to having a decent standard of living with food and shelter that all students expect as a human right. In waging her battle for equal rights for non-EU international students, Sanaz was evicted from her university accommodation in May 2014, threatened with an ASBO (anti-social behavior order) and now fighting against deportation. All non-EU international students should have the right to challenge their universities for their failings without the threat of harassment or deportation. Justice4Sanaz is a movement to redress the failure of the student movement to discuss the myriad of ways that non-EU students, especially those who are people of color, are silenced, bullied and threatened within the neoliberal British university system.
View all posts by justice4sanaz →
This entry was posted in Uncategorized. Bookmark the permalink.
%d bloggers like this: